Kombucha Causing Buzz – Sample It at This Year’s ideacity 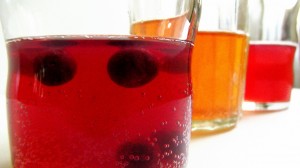 When Zoey Shamai started her kombucha business four years ago, she brewed the fermented tea in the kitchen of her Toronto apartment. She would add kombucha culture – a pink, blobby-looking colony of bacteria and yeast – to a mixture of cool tea, sugar and a starter of kombucha tea from a previous batch, and let the concoction sit for about three weeks before straining it and pouring it into bottles.

It was vinegary and pungent, and not particularly pleasant to drink. But Ms. Shamai, who was introduced to the beverage while living in a yoga community in New Mexico,was convinced it worked. Like others who swear by the health benefits of kombucha, she felt energized after drinking it, and found it aided digestion. The challenge was making it palatable and accessible to a broader market.

After tinkering with the recipe and using different flavours of tea, such as peach and ginger, to improve the taste, Ms. Shamai rebranded her kombucha product in 2011, marketing Tonica Kombucha as a naturally sparkling, organic alternative to soft drinks. Since then, her business has mushroomed. She has moved her operation out of her apartment into a 1,000-square-foot facility, and now distributes Tonica across Canada, including at upscale retailers including Whole Foods.

Long embraced by health-food fanatics and yoga enthusiasts, kombucha has entered the mainstream, securing space on grocery store shelves beside sodas, energy drinks and bottled smoothies. Even high-end kitchenware retailer Williams-Sonoma has jumped on the kombucha bandwagon. The chain has introduced do-it-yourself kombucha kits and supplies as part of its new “agrarian” line of products for urban homesteaders. For beverage makers, revamping kombucha’s hippie image has meant focusing on flavour. In North Vancouver, for instance, Barbara Schellenberg, a partner of the new Ethical Soda Co., recommends sipping the company’s blackberry, lavender, raspberry and hibiscus-flavoured kombucha teas with meals as a non-alcoholic alternative to wine.

The Waldorf Hotel in Vancouver even uses Ethical Soda’s kombucha in cocktails. Vanessa Bourget, a head bartender at the hotel, mixes the brand’s cassis-flavoured kombucha tea with cassis liqueur and vodka or gin to create a “Kombucha Regal.”

Ms. Bourget, who is also a holistic nutritionist, is constantly creating new cocktails with a healthy twist, using vitamin- and antioxidant-rich ingredients, like aloe vera, rose hips or berry juices, to help counter the effects of alcohol. Kombucha tea was an ideal addition to her bar menu, replacing sweetened, artificially flavoured mixes, she says.

On its own, the bottled kombucha tea tastes like a sweet, slightly vinegary soda, Ms. Bourget says. “If I put in a liqueur, the sweet and sour works really well.”

Although the kombucha craze is just beginning to catch on in Canada, it has had a significant head start in the U.S. According to SPINS, a market research and consulting firm for the natural products industry, sales for the category of functional drinks that includes kombucha were $400-million U.S. in the past year. Celebrities such as Halle Berry, Madonna and Lindsay Lohan have all been known to drink kombucha. The publicity, however, has not been entirely favourable.

In 2010, questions surfaced over whether trace amounts of alcohol in bottled kombucha, produced by fermentation, set off Ms. Lohan’s court-issued alcohol-monitoring bracelet. That same year, U.S. authorities warned retailers that kombucha makers could be breaking the law if their products exceeded alcohol levels of 0.5 per cent, prompting some stores to pull drinks off the shelves.

Far from quelling the market, however, these setbacks in the U.S. actually served to boost the kombucha boom, says Simon Bertrand, president of Montreal’s Rise Kombucha, as it forced producers to improve their products. “This crisis was a milestone in the mass commercialization of kombucha,” he says.

Mr. Bertrand’s company, which has been producing kombucha beverages since 2007, has experienced rapid growth. Sales have doubled every year, he says, and over the past year, large retailers like IGA and Metro have started stocking Rise Kombucha.

Not all kombucha beverages available in Canada are licensed to be promoted as health products. As such, some producers are prevented from making health claims, although enthusiasts praise kombucha for its purported probiotic and antioxidant properties.

Meghan Walker, a naturopathic doctor and co-founder of the Integrative Health Institute in Toronto, says it’s hard to say just how beneficial kombucha drinks are to one’s health. In general, fermented foods have been shown to boost normal, healthy probiotics and gut flora, which may help digestion in some individuals. However, she says, she has not encountered any evidence to suggest kombucha can reduce or eliminate toxins from the body. “It is not a go-to for me from a detox perspective.”

Her advice is to consume kombucha beverages in moderation, if they make you feel well. But, she warns: “Don’t expect it to be a magicliqueur.”

Source: The Globe and Mail